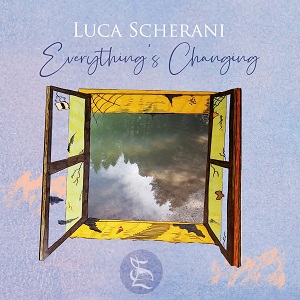 For any self-respecting Italian prog fan, Luca Scherani‘s name is by no means unheard of: a long-time member of La Coscienza di Zeno, he has collaborated several times with Fabio Zuffanti in the Höstsonaten, Finisterre, Aries and Merlin projects, and recently lent his creativity to Stefano ‘Lupo’ Galifi, the historic voice of the Museo Rosenbach, for the release of his solo album “Dei ricordi, un museo.”

Tireless composer and arranger, Luca Scherani returns with his solo album, ten years after the release of “Everybody’s Waiting also published by AMS. In “Everything’s Changing,” the Genoese musician, being able to express his talent without compromise, shows without limits his infinite love for classical and symphonic music (and even opera in the closing track Ein Lied der Soldatenfriedhof in Bruneck), a characteristic of Progressive Rock in its golden years, and puts these ingredients at the service of the songs with the addition of sporadic electronic and Jazz Rock interventions, in a heterogeneous and almost completely instrumental album, to be listened to in one breath. The guests on “Everything’s Changing” almost all come from the Ligurian scene, and among them we once again find Martin Grice on saxophone, Paolo Tixi on drums, Joanne Roan on flute, Alessio Calandriello on vocals, and a string quartet composed of Sylvia Trabucco, Alice Nappi, Ilaria Bruzzone and Chiara Alberti.

Purchase the album via AMS: https://ams-music.it/wp/luca-scherani-everythings-changing/

You can find out more about which cookies we are using or switch them off in settings.

This website uses cookies so that we can provide you with the best user experience possible. Cookie information is stored in your browser and performs functions such as recognising you when you return to our website and helping our team to understand which sections of the website you find most interesting and useful.

Strictly Necessary Cookie should be enabled at all times so that we can save your preferences for cookie settings.

If you disable this cookie, we will not be able to save your preferences. This means that every time you visit this website you will need to enable or disable cookies again.

This website uses Google Analytics to collect anonymous information such as the number of visitors to the site, and the most popular pages.

Please enable Strictly Necessary Cookies first so that we can save your preferences!